The most recent and also the biggest test that was conducted, was carried out by DSV, one of the world’s largest transport companies with its own fleet in Europe, consiting of 8500 trailers.

After preliminary tests of the 3 biggest tyre sealant brands, where the brand Ultra-Seal stuck out by far with the most promising results, DSV decided to carry out a large scale test in order to be absolutely sure of the results before applying tyre sealant in all vehicles.

The test ran for 9 months from May 2015 to February 2016 in order to measure performance under different climate conditions. All the trailers had been used for mixed traffic, all over Europe and with an average number of 72,000 km per year. All trailers were fitted with GT tyres.

The test results are groundbreaking: 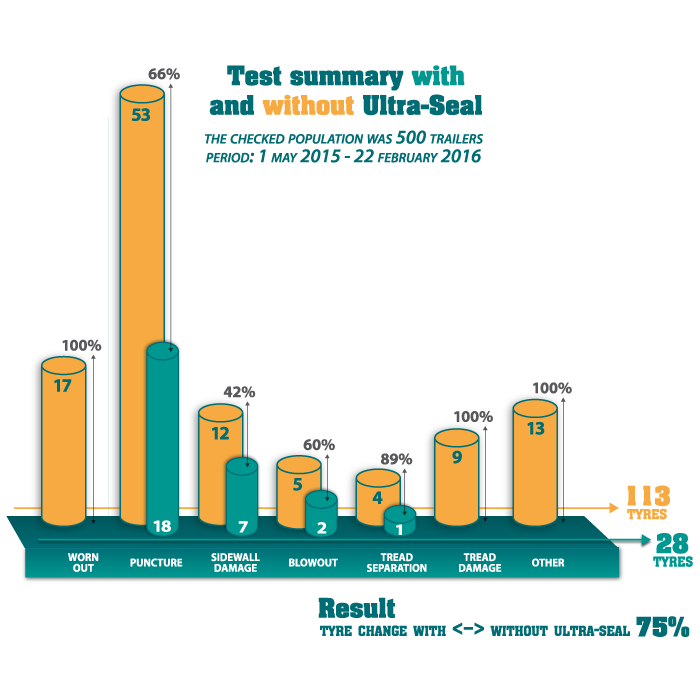 The overall result shows 75% less punctures, blowouts and other tyre incidents on the trailers with Ultra-Seal. In other words, when directly compared, Ultra-Seal resulted in a reduction from 113 to 28 incidents.

These figures indicate that about 5.1% of the tyres without Ultra-Seal will suffer a breakdown in the course of a year.

Only less than 1% of the tyres with Ultra-Seal will suffer a breakdown in the course of a year.

Since the tyres are not worn out, it is not possible yet to measure accurate savings because the wear rate is not the same all the way through the tyre tread.

DSV does not operate its own trucks, so the test did not include fuel savings. However, according to the results mentioned in the Quality and Knowledge section, fuel savings will also be significant due to reduced pressure loss and possibly even bigger than the savings on both breakdown and reduced tyre wear.

Read More | Tested all over the world